Our ancestors built wooden huts, inns, mansions and churches. Oldest of these surviving buildings, most of which are religious buildings, come from the beginning of the 15th century. 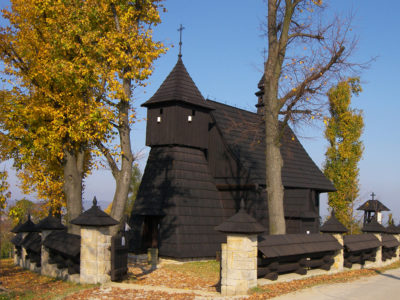 We would like to invite you for a trip along wooden architecture route in the vicinity of Tarnów.

Boundaries of Tarnów region are determined by Raba River in the west, Wisloka River in the east, Wisła River in the north and Rożnowskie Lake in the south. Here you will find tens of wooden churches that document vital role of religion and tradition to the locals. The most recent churches date to the 1920s. Most were built on simple plan, with no aisles and high roofs. Towers were built at the west end of the nave. Some churches are surrounded with arcades, the so-called Soboty (or Saturdays), a shelter for worshippers who arrived already on Saturday for Sunday service. Churches were built of wood because of the scarcity of other building materials. The most commonly of larch. Majority of buildings in Malopolska were built using horizontal log technique. Carefully fitted logs were joined at the corners without any nails or screws. 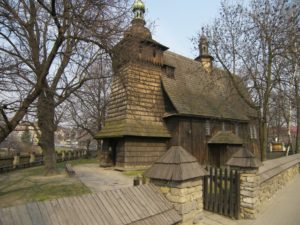 Development of brick Gothic architecture had major impact on the form and style of wooden churches built in the 15th century. Their most distinctive features are enclosed, three sided presbyteries, Gothic portals and window frames. Roofs were also enriched and because of that they became more complicated. Gothic tradition resisted trends from the Renaissance. Wooden churched in the Gothic style were built even in the 18th century. Surviving wooden architecture in the Tarnów region includes churches, manor houses as well as architecture of picturesque small towns. 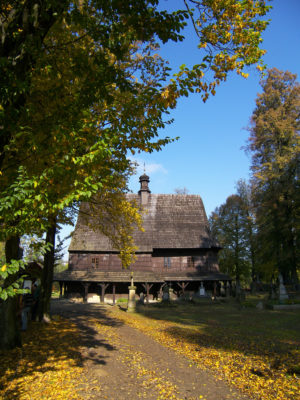 The most important monument of the religious architecture in the Tarnów region is, listed on a UNESCO World Heritage List, saint Leonard’s church in Lipnica Murowana. According to a legend it was built on a site of ancient pagan worship. The only thing saved from this old structure is a Pillar of Światowid. Currently it supports the altar of saint Leonard. By the decision of UNESCO, a copy of the altar was placed in the church in order to protect it from destruction. The original piece is currently one of the most precious exhibits in the Tarnów Diocese Museum.

Another precious monument is, in the Tarnów neighboring Skrzyszów, saint Stanislaw the Bishop’s church. This temple was built in the XVI century and was founded by Jan Amor Tarnowski. It is considered to be one of the biggest and most beautiful examples of wooden architecture in Małopolska.

In Tarnów there are two churches which are made entirely of wood from the XV and XVI centuries. Beautifully decorated interiors contain original furnishings. Blessed Virgin Mary church, also called the „church by the Burek” is home to a painting of the Blessed Virgin with a Child, known for many miracles. In the Holy Trinity church we can find a painting with a rare depiction of Holy Trinity in a Pietas Domini style which shows dead Christ resting on the knees of God His Hather. 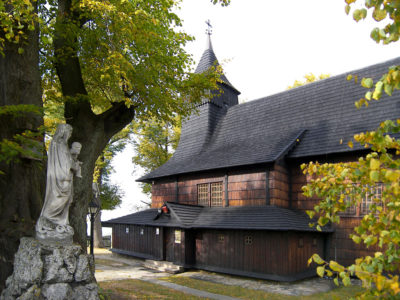 Zawada contains the church of St. Martin that was built in the XV century and then reconstructed a few times during the late Gothic period, which is evident in the structure’s design.

Jastrzębia contains the parish church of St. Bartolemew the Apostle, built in the early XVI century. Inside the church you can view the late Baroque style altars, pictures, sculptures, a stone Renaissance-Baroque baptismal font, and a Gothic bell dated between the XV and XVI centuries. 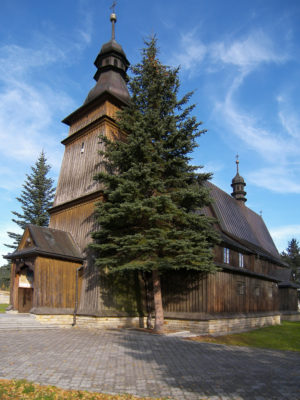 Biesiadki maintains the parish Church of św. Mateusz Apostoł Ewangelista (St. Matthew the Apostle and Evangelist) that was built in 1661 in Baroque and Gothic styles. Its interior has: buttresses with vaults, a woodwork portal and door, Gothic furnishings in the main entrance, and Baroque objects dated to the 17 th -19 th centuries.

Binarowa is the home of the Gothic church of św. Michał Archanioł (St. Michael the Archangel), which was founded around the turn of the 16 th century and was thoroughly renovated in 1641 and 1890. Designated a World Heritage Site by UNESCO.

Bochnia has a belfry located next to the parish church of św. Mikolaj B. (St. Nicolaus Bishop). The bells are recreations of the originals built in 1609, which burned in 1983.

Dąbrowa Tarnowska contains the church of Wszyscy Sweci (All Saints) that was built in 1771 in Baroque style and its interior, mainly in Rococo, dates back to the end of the 18 th century.

Gosprzydowa has the parish church of Sw Urszula z Towarzyszkami that was built in 1697. The Baroque interior is dated back to the 17 th and 18 th centuries and its stone stoup was constructed in 1585.

Iwkowa owns the cemetery church of Narodzenie NMP, dated to the second half of the 15 th century. On the walls of its presbytery, there are murals depicting the Passion of Christ.

Gnojnik is where the church of Sw Marcin Bp. (St. Martin the Bishop) stands. It was built at the turn of the 17 th century in the style of Baroque with late Gothic elements that is no longer used.

Moszczenica maintains the cemetery chapel of Chrystus w Ciemnicy, erected in the second half of the 17 th century. There is an ornately designed wood portal near the entrance and Baroque wall paintings that narrate the scenes from the Passions of Christ.

Podole is the home of the parish church of Podniesienie Krzyża Panskiego constructed under Gothic influence with a Baroque tower in the early 16 th century. The interior is adorned with a mural created in 1542.

Rozdziele contains the parish church of St. Jacob, built in 1563 and founded by King Zygmunt August in Krolowka; it was transferred to Rozdziele in 1990. At the entrance of the structure there is a portal with the intricate woodwork of a coat of arms “Topor” that is from the second half of the 16 th century.

Sobolow has a parish church dedicated to the honor of All Saints, which was built at the turn of the 17 th c. Its interior is decorated with a flying buttress, Baroque furnishings, and a 1583 picture of the Crucifixion.

Wojnicz is a small town which founded the auxiliary church of St. Leonard. It is reported to have been built in 1209, but experts have dated its origin to approximately 1460.

Wooden manor houses in the Tarnów region are precious architectural monuments as well as teachers and witnesses of polish history.
House of Wincenty Witos in Wierzchosławice, a place of annual pilgrimages of people from all over Poland, was converted into a museum of three time Polish Prime Minister, creator of the first folk university. Till this day, almost all of the equipment and original furnishings of the house, which was a witness to the birth and death of one of the greatest polish leaders, survived. 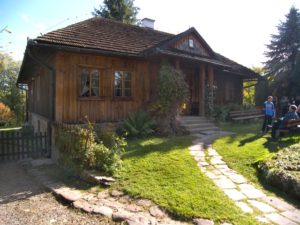 Manor house in Dołęga, today a branch of the Regional Museum in Tarnów, has an equally interesting history. Its owners were assaulted during the peasant uprising, later it served as a hospital for poles wounded during the January Uprising. Stay in this beautifully maintained property and walks in the surrounding park, faithfully recapture the climate of XIX century nobility.

Nowy Wiśnicz has a mansion, called Koryznowka, that is dated back to the early 19 th century and maintains a biographical museum of Jan Matejko (built in classical style). 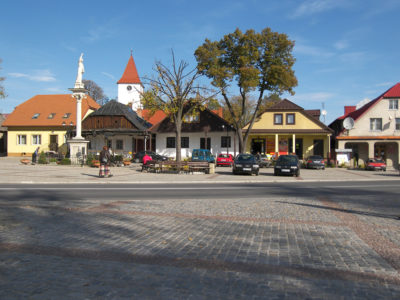 Rarity of the Tarnów region are small towns which emanate a specific climate, and which style is created by original urban layouts, in many places from the middle ages. Characteristic for them are low, mostly ground floor buildings, facing the city square.

In Lipnica Murowana and Ciężkowice , houses are shielded by arcades, placed on characteristic pillars.

Carpenters from Zakliczyn , as the only ones used a technique of building houses with extended eaves, supported by beams, which allowed for a change of wall layout, without a need to alter the roof.

Other interesting examples of wooden architecture are the villages.

In Mokrzyska we find a complex of cottages built in a specific for Małopolska, Kraków style with whitewashed walls. 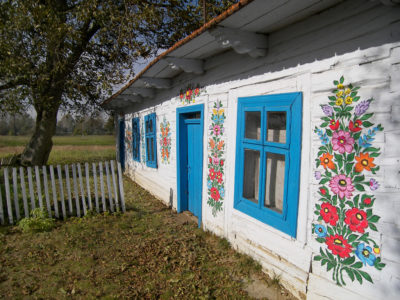 In Ujście Solne, a historic town located near the mouth of the river Raba the salt from Bochnia was unloaded. From this post was developed a large market square that spawned multiple outreaching roads. Also preserved are wooden houses near the town square that were constructed in the XIX and XX centuries.

Zalipie is the only „painted village” in Poland that preserves the tradition of decorating both the interior and exterior of houses with murals of bouquets. At the present, there are about thirty cottages and farm buildings that have walls adorned with these unique flower paintings.