Spycymir Leliwita started to build the castle in 1329, a year after he has been granted a village called Tarnowiec (Tarnów Minor). This date appears in the 17th century Bernardine Chronicle. In 1331 chapel on the castle was consecrated. Originally the castle was constructed with stone and brick, similar to the fortresses in Rytro and Czchów, with an impressive tower of – so called – ultimate defense, small residential area and a chapel. The whole structure was surrounded with defensive wall with a gate. It was located on the northern side of St. Martin’s Hill and surrounded with a moat on the southern side. Nowadays only hardly visible outlines of the basement – a part of the eastern “upper castle” remains.

In 1441 the castle was conquered and burnt down by the Hungarians. It was rebuilt in the second half of the 15th century and later adapted by Hetman Jan Tarnowski to his residence. He surrounded the castle with modern bastion fortifications, of which well preserved is an arsenal with some columns and vaulting remains, situated on the eastern side. The castle had its own library, armory, treasury and a family museum. In the western part of the castle, which provided supplies, bakery, brewery and few storehouses were located. From the “upper castle” to the supplies part lead a road through a bridge built over a rock saddle which separated the two castles. After the death of Hetman’s son – Jan Krzysztof, the castle was inherited by Hetman’s daughter – Zofia, married to duke Konstanty Ostrogski. After Zofia’s death families of Tarnowski and Ostrogski struggled for the castle. During the night of 17-18 April 1570 the castle was captured and looted. 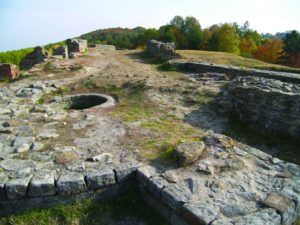 Since then, it was no longer a grand residence but served as a seat of the foremen of the Ostrogski, Zasławski, Lubomirski and Sanguszko families. Forgotten and abandoned the castle turns into a ruin. In 1723 the Sanguszko family, suzerain of the castle, moved to a mansion in Gumniska quarter of Tarnów. In 1747 ruined parts of the castle were dismantled and used in the constructions of Bernardine church and monastery. Pieces of stonework from the castle were presumably adjusted to many other buildings within Town Square. One of the portals was placed in the mansion-house in Gumniska. In 1848 remaining ruins were partially covered up when construction of a mound commemorating victims of peasants’ uprising started. 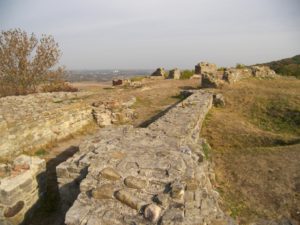 But the work was never finished because Austria-Hungarian authorities ordered locals to cancel the project. In 1939 the ruins and a surrounding area were donated to the city of Tarnów by duke Roman Sanguszko. But the outbreak of WWII interrupted legal procedures and no changes were made in land and mortgage register. In 2008 Paul Sanguszko, grandson of Roman, sold the whole area to a private investor.
Between the years 1963 and 1969, with the effort of Tarnów Monument Protection Association, the ruins were partially exposed, reconstructed and preserved. Detailed information on the history and architecture of Tarnowski Castle is presented in a monograph “In Castro Nostro Tarnoviensi” by Krzysztof Moskal.