“I grew up in Mościce but realized its uniqueness not before my first distant journeys. I was a student in Kraków when I understood what distinguishes Mościce from other locations in Poland. And my international travels allowed me to acknowledge the allure of Mościce on a much larger scale.” 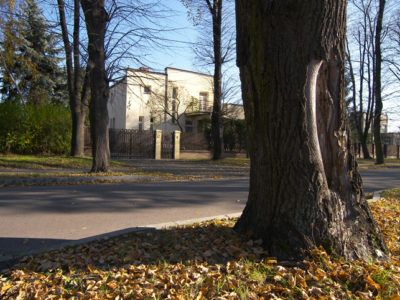 Mościce is an industrial district of Tarnów incorporated into the city in 1951. Its urban layout was designed based on Sir Ebenezer Howard’s garden city concept. Despite all the alterations introduced to the urban space, especially during the communism era, Mościce has always aspired to the ‘garden city’ ideals, still visible in its plan, architecture and its character. Mościce allures residents of other districts of Tarnów as well as an increasing number of tourists. The 120 minutes Mościce walking route begins and ends at a bus depot, in the neighborhood of the largest industrial complex in the region – Azoty Tarnów chemical plant. Zakłady Azotowe w Tarnowie-Mościcach is the leader of Grupa Azoty, one of the key chemical holdings in Europe. Mościce is very well served by public transport. Several lines connect the district with the city center (including the most frequent line 9). Mościce is also a train station and a stop for intercity coach services operating on Kraków-Tarnów-Rzeszów route. If you travel by car, the district can be reached from A4 motorway by taking “Tarnów Zachód” exit (marked with “Azoty Tarnów” exit sign) at 498 km. There is a spacious car-park right by the depot. 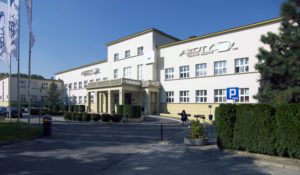 From the depot turn west (right) into Kwiatkowskiego St. Follow it about 250 meters to reach imposing Building of Factory Management, built between 1934 and 1938. Decade earlier, in 1927, Polish Government decided to build a chemical plant on a greenfield site just north-west of Tarnów. Państwowa Fabryka Związków Azotowych (PFZA), or State Works of Nitrogen Compounds, and the adjacent residential area were built on 670 hectares of land of two villages (Dąbrówka Infułacka and Świerczków) acquired from the Duke Roman Sanguszko for the $210 000.

The location was chosen carefully and met the strategic and economic needs of the state that has regained its sovereignty only recently. It secured water supply (the Dunajec and Biała rivers), ease of transport, local customers and the optimal distance from the hostile neighboring countries. Tarnów, in turn, has gained the opportunity to improve its economy. The factory was built in just two years and initial tests of the production line have been completed by December, 1929. Expanded and modernized, the factory remains vital element of regional economy. Further along Kwiatkowskiego St., there are buildings of a medical center and a school (built in 1947) located. There, we cross the street to get to Kasyno (Casino) complex of modernistic buildings. It comprises three buildings (central and two side ones), forecourt and spacious park in the back. Today, the central building houses a restaurant and the side one is a branch of medical emergency unit. 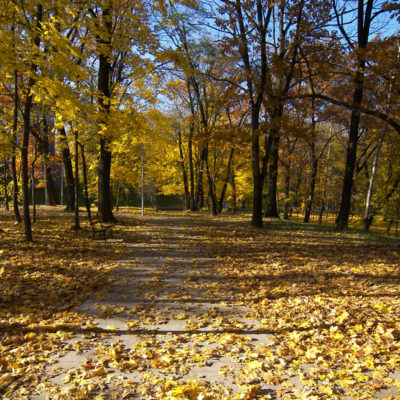 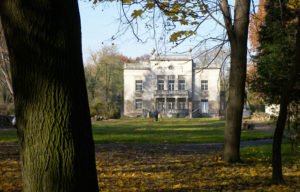 Continue east along Kwiatkowskiego St. until the Głogowa St., central street of prewar villa section of the district. Residential complex in Mościce has been listed in the register of monuments, in 1979. Głogowa St. ends at the gates of luxurious neoclassic residence of the factory’s CEOs, known as ‘Dom Chemika’ (Chemist’s House). It was designed between 1927 and 1929 by Konrad Kłos, a Warsaw architect, who modelled it on the Łazienkowski Palace in Warsaw. ‘Chemist’s House’ was the first residential building completed in Mościce. Its most notable resident was Eugeniusz Kwiatkowski, chemist and later deputy Prime Minister of Poland. The house was Ignacy Mościcki’s (President of Poland and one of the founders of the factory) favorite lodging during his visits to Mościce. It is one of a few building with original furnishings, including Kwiatkowski’s office desk. Unfortunately, the house is not available to visitors. In the south the residence borders Eugeniusz Kwiatkowski Park, established in the 1920s. One of its curiosities was a small zoo, called ‘małpi gaj’.

Turn right (west) into Jarzębinowa St., then left (south), up Topolowa St. There are two stone benches of 1929 set on both sides of the street. Horizontal line on the back of the bench on the right marks the level of waters during the flood of 1934. 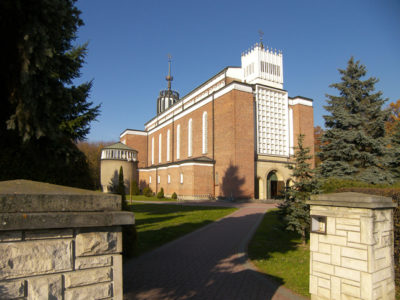 Church of the Blessed Virgin Mary Queen of Poland had been designed already in 1941 but its construction has not begun until 1948. For two years the Masses have been celebrated in a spacious warehouse and from 1931 – in a provisional chapel. In 1938, Franciszek Lisowski, Bishop of Tarnów, has ultimately established the Parish of Saint Thérèse of the Child Jesus and Saint Andrew Bobola in Mościce (4 000 souls at the time). The Rev. Stanislaw Indyk, first rector of the parish, completed construction of the church in 1956. It remains among the largest in Tarnów. 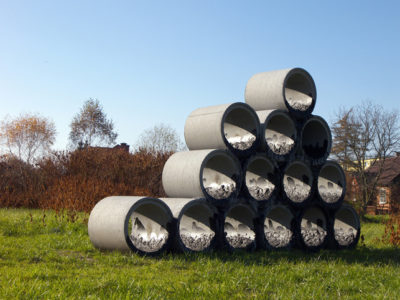 The route continues east, along Chemiczna St., crossing spacious car park, passing by a kindergarten (built in 1954) and speedway track (left). A pyramid-like structure set on the right is Wilhelm Sasnal’s ’28.03.83’ sculpture, also known as ‘industrial fears’. It is composed of pitched cement rings. Random date: March 28, 1983, inscribed inside one ring symbolically commemorates an incident which fortunately never occurred. It directly refers to the cold war times and an omnipotent fear shared by all the residents of Mościce aware that the factory was the strategic target of the missiles from beyond the Iron Curtain.

Another stop is… the Mościce train station. Initially, the facility was a small stop served by a wooden building, built back in 1927. Its name was Tarnów-Dąbrówka at the time. Old building has been replaced with the present one in the 1970s. Its modernistic form and combination of the materials used for construction is widely known. New building of Tarnów-Zachodni Station (name changed in the 1950s) together with an underpass were jointly financed by the factory and railway company. 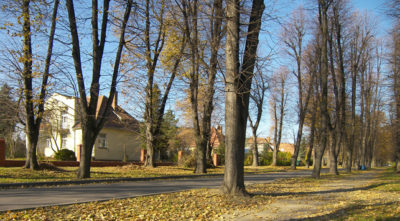 The underpass takes you to a site where on June 2 1934, Ignacy Mościcki laid the foundation stone for ‘Za torem’ housing development. In 1998, a commemorative stone was set up in a square at the crossing of Obrońców Lwowa and Czerwona streets. The route continues along Obrońców Lwowa, Sienkiewicza and Norwida streets. The houses there were built in three sizes, reflecting the needs and status of each member of the housing co-operatives. Norwida St. was the central road of ‘Za torem’ with stately homes of the office-workers and engineers. The street ends with ‘Sośnina’ park-forest. Large educational facility at Norwida St. was built in 1950. A cemetery adjacent to Sośnina, established in 1941, remains active, although presently it occupies the center of.an expanding residential area (population of Mościce exceeds 10 000). Mid and semi-skilled workers built their homes west of ‘Za Torem’. Those are mainly descent, semi-detached houses.

The route continues along the Czerwonych Klonów St., back towards the factory. You can branch right off the main route into Stanisława Anioła St. After some 700 meters, you get to the dikes of Biała River. Turn left, towards a rail bridge, to discover an interesting ‘Fortalicjum nad Białą’. The building is actually an element of Austrian fortification system of WWI. Four turrets and the preserved loopholes are the remnant of its military origin. The outpost is not available for visiting. It can also be seen from the trains travelling Kraków-Tarnów route.

Back on Czerwonych Klonów St., you pass through a complex of sports facilities. The speedway track (left, capacity of 16 000) is widely recognized as the home of the Unia Tarnów speedway team. More facilities (indoor and outdoor) are located on the right. Former ‘House of Culture of the Azoty Plant’ dominates area near the intersection with Traugutta St.

Zakopane Style architecture, in which the building was designed, originated in the Polish highlands and therefore looks incongruous in flat, modernist neighborhood of Mościce. Officially opened on ‘The Chemist’s Day’ of 1972, it has recently been thoroughly renovated. At present, the building comprises a movie theater, conference halls and show rooms. It is the home to the Mościce Arts Centre – a new but already recognized institution.

Continue along Traugutta St., passing by a police station (left) and straight at the intersection with the Ks. Indyka St. Tall building on the right, actually the highest building in Mościce, was built as lodging for the factory workers. Renovated and adapted to the standards of 3 star hotels, has been renamed as ‘Cristal Park Hotel’. The last stop at Traugutta St. is ‘Dom Sportu’ (House of Sports) – an indoor sports complex comprising sports hall, swimming pool, mini-waterpark for kids, gym and bowling alley. Walls in the entrance hall are adorned with ceramic mosaic composition. The facility marks the east border of the recreational area of Mościce.

Now go back to the intersection with Ks. Indyka St. and follow it northwards. The blocks of flats on the left are the first built in Tarnów, already in the 1950s. With time, more blocks have been added but the neighborhood never abandoned the ideals of garden city concept. An attentive observer may notice the high poles with speakers atop, spread all around the district – remnants of the factory cable radio. Now turn left into busy Kwiatkowskiego St. The bus depot is just some 100 m ahead.

The Mościce was given its name in tribute to Polish President

Decree of the Minister for Home Affairs, issued on 25 June 1929, merged the villages of Dąbrówka Infułacka and Świerczków, into one administrative unit. It was named Mościce, in tribute to President Ignacy Mościcki, founder of the new industrial district of Tarnów.

Kwiatkowski was the managing director of Nitrogen Plant from 1930, when he stepped down as Minister for Trade and Industry, to 1935, when he took office as Minister of Treasury. He wrote Dysproporcje. Rrzecz o Polsce przeszłej i obecnej (Disparity. A thing about Past and Present Poland) during his first year in Mościce.

Flagship investment of the 1920s in Poland

Construction of the factory in Mościce, along with Gdynia harbor, was the major investment project of the 1920s in Poland.

The factory was the first to introduce routine medical examinations for its employees.

Thermal power station which supplied electricity to the factory was the largest in Poland. Its two 114-meters high chimneys were among the tallest in Europe. Neither has survived.

Construction of the factory was financed with the funds of an international loan, credited by the central and reserve banks of 14 countries. Over 70% of the loan has been granted by the USA.

The architects of the factory had considered river transport as the cheapest and therefore scheduled construction of a port on the Dunajec River. The investment had to be cancelled due to the Great Depression and outbreak of WWII. Equally ambitious was project of fast tram line (est. 40 km/h) connecting Mościce and housing estates in the east of Tarnów, which would run in a tunnel underneath the city center. The plan was developed in the 1980s.