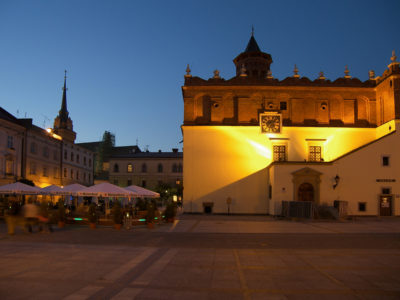 Shape and size of the Town Square remain unchanged since the location of Tarnów in 1330 although the buildings date to the 16th to 18th century.

Situated in the center of the town, the Town Square has always been a place where social life and trade concentrated. Its location in the central part of the town hill, on the ground slightly lowering towards south was advantageous as far as a rain water drainage is concerned. The dimensions of the Square in relation to other towns are rather typical and its sixty-six acre area places it among smaller ones. The buildings, wooden at first, were replaced consequently with a brick structures from the beginning of the 15th century, starting with masonry cellars built under a wooden house. Fires that broke in Tarnów at the end of the 15th century completely destroyed merchants’ buildings within the Town Square. With the support of Jan Amor Tarnowski, the then owner of Tarnów, the houses were rebuilt in a new attractive form, around centrally located Town Hall. In the 16th century those buildings were turned into typical middle-class tenement houses with arcades. Soon after, due to several wars, the town was decaying. The slow process of recovery and development begins in the second half of the 18th century, especially during the Austro-Hungarian reign. Nowadays the building surrounding the Town Square are mainly two-storey tenement houses representing various architectonic styles and features. The most characteristic are houses number 20 and 21 located in the northern frontage. Another unique structure is an early 20th century passage situated in the western frontage and connecting the Town Square with Plac Kazimierza Wielkiego (King Kazimierz the Great Square). 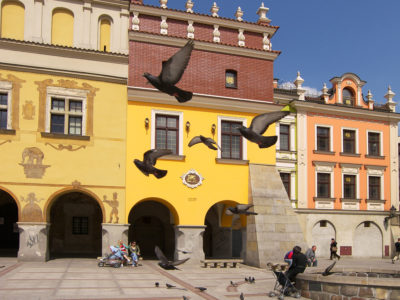 The House no. 20 was founded in 1565 under Renaissance influence and belonged to wealthy Scottish merchants at this time. In the 17th century it became the location of an Arian’s chapel until the end of the 18th century when it served as the Lodge of Freemasonry. Currently, the Tarnów Regional Museum occupies this historical structure.

The House no. 21 was built at approximately 1568 in the Renaissance style; it also currently serves as a component of the Tarnów Regional Museum. 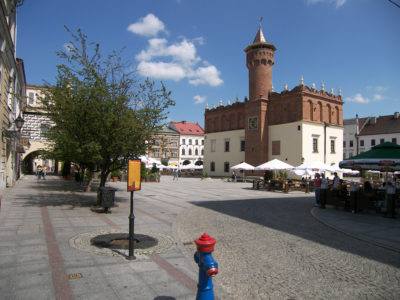 Centrally located Town Hall, at first Gothic, rebuilt in the middle of the 14th century, was reconstructed on several occasions. The Town Hall is a two-storey Renaissance building made of brick. The main construction is 18 meters high with a tower reaching the height of 30 meters. The building is rectangular with a tower on the northern side and a staircase on the southern side. It is crowned with a brick attic and twenty-eight pits. The ridge is decorated with stone volutes, pinnacles, and fourteen masks. The lower part of the tower is square, the top part is round with a corbelled guard gallery. The roof is pointed with a tin Pogoń Litewska, the Sanguszko family coat of arms, on the top. The crest was mounted there at the end of the 18th century and replaced the Leliwa, the Tarnowski family coat of arms. At first the Town Hall was a Gothic building. Now, the only preserved Gothic element is a brick ogival lintel of the portal in the ground floor hall, which probably served as an entrance. 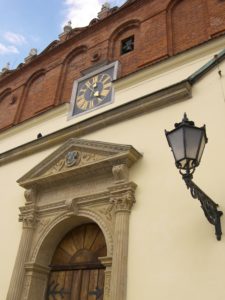 The first written information about the Town Hall dates back to 1448 and says: “the salary of 8 grzywna (Medieval currency) every year from the Town Hall (de pretorio) for the hospital chapel outside town walls”. This document contains also complete name list of the old and new town council. Another note about the Town Hall appears in the town council’s files in 1526. It concerns the costs of placing “the old clock tower door” and “the Town Hall chamber door”. The Town Hall was thoroughly rebuilt probably at the end of the 16th century. Western part with a cellar was added as well as a staircase on the southern side of the building. The whole construction was covered with a roof hidden behind a high attic similar to the one crowning Cracow’s Cloth Hall. In the twenty-eight pits of the attic there were portraits of the Tarnowski family members from Spycymir to Jan Krzysztof (who died in 1567) painted presumably in a sgraffito technique. The number of masks symbolizes fourteen members of old and new town council. From the middle ages to 1792 the Town Hall was several times destroyed by fire. At the end of the 19th century the building was decaying. Between 1889 and 1892 it was rebuilt but the detailed renovation works were carried out between 1962 and 1968. At that time Town Hall’s rooms were adapted for exhibition purposes. 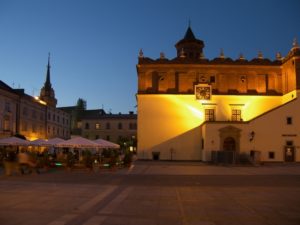 Now the Town Hall is a branch of the Regional Museum in Tarnow, where stationary exhibitions of the Sarmatian portraits, weapons from the Podhorce castle, China ware and silverware prevail. 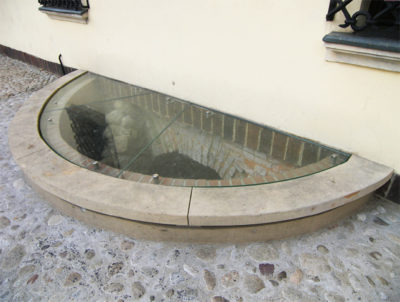 The Dungeon in Tarnów. An enigmatic structure was discovered during the renovation of the Town Hall in 1997 and 2010. It was found below the north wall of the building. It was a cylindrical stone well 3 meters deep and 2 meters wide. At first, it was thought that it had served as a water tank.

The results of the archaeological surveys and drilling in the bottom of the structure revealed that it could not be used as a water tank. The permeable layer of sand could not hold water, as it is over 8 meters deep. It was established, that most likely it was a city prison.

Tarnów’s Town Hall has changed throughout the years. Originally, the standalone Weigh-house building with an additional room was built. The (…) court meetings were held in that room. Additionally documents and seals where kept there. The room was also called “wietnica”. The actual Town Hall, where the Town’s Council meetings were held, was erected on the west side. It was almost in the center of Town Square. It was a standalone building made of brick, with a rectangular tower in one corner. The town’s prison was located between those buildings. At the beginning of the 16th Century those two building were connected with an “inlay”. The old city prison was merged with the foundations using a structural arch.

In the 1560’s and 1570’s the Town Hall was altered and expanded to its present Renaissance form. Only a few elements of original Gothic building survived until today.

Many items were extracted during the archaeological survey of the dungeon. Most of them were clay vessels. They were reconstructed and are now exhibited in Town Hall. 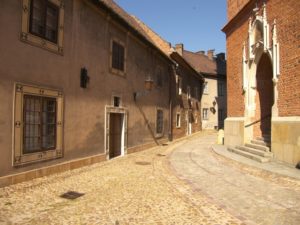 The Mikołajowski Family House. Among the dense row of buildings with fronts covered with parget, there is a characteristic tenement house made of raw brick, with rich stonework from the early Renaissance times. Above the stone portal of the entrance door, on the right, there is a built-in Griffin coat of arms with many ornaments. There is also a date written in Arabic and Roman – year 1524, and below a Latin inscription: Fundatio Domus per Johannem Mikolayowski (The House Built by Jan Mikolajowski). The same date, name and coat of arms appear also on a stone portal inside of the house. Jan Mikolajowski and his wife Barbara came from Mikolajowice – a village near Tarnow, which they later sold to hetman Jan Tarnowski. 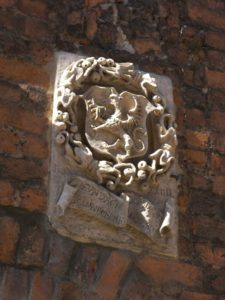 The childless couple run into debts and, having disposed the whole property, moved to Tarnow. In 1527 they donated the tenement house to collegiate vicars, obliging them, at the same time, to say two masses a month for the peace of their souls. In 1547 the college, with a permission from the chapter, exchanged the house with the college cantor Marcin Blady for a tenement-house called Zamek (Castle) or Jurkow. Blady sold the house to Mikolaj Łowczowski from Plesna in 1554 and finally in 1578 it was passed to the chapter of Tarnow. During the chapter’s administration the house had many inhabitants and in the 18th century it became a residence of the provost of Academic Colony (Akademiola) which operated in Tarnow from 1756. In 1791 the house was taken by Austrian authorities for the Religious Fund and then passed to a Gymnasium. To 1904 the Mikolajowski house was used by various types of schools. In 1930 the District Medical Center and the Hygiene Museum were located in the house. After the WW II it was used by the Diocesan Museum and in the years between 1947 and 1949 the building was renovated and adjusted to the exhibition purposes. The house is storied and has a cellar; on the ground floor there is a hall and a staircase. On the first floor the arrangement is similar, except there is a room instead of the hall. The house was probably built by Kasper Simon – a Slovak, an associate of Franciszek Florentynczyk and Bartlomiej Berecci – builders of the Wawel Castle. 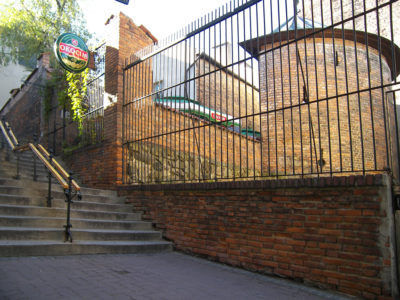 Half-Bastion is a semicircular flanking tower built in the first half of the 16th century that composed part of the lower outer city wall. 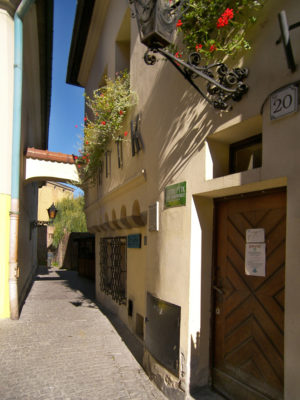 The Florentine House was founded at the end of the 16th century and it stands as an example of urban Renaissance architecture with an overhanging front facade.