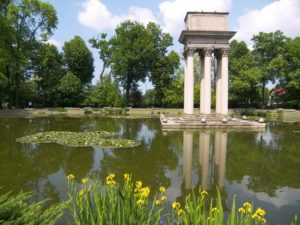 In the middle of a pond in the town park, former Shooting Garden of the Cock Fraternity, a considerably large Mausoleum of General Joseph Bem is placed. Bem, the hero of Polish and Hungarian fights for independence during the November Insurrection and the People’s Spring Struggle 1848-1849, was born in Tarnow in 1794 and died in the far Syrian Aleppo in 1850, where he was originally buried on a Muslim cemetery.
In 1926 a committee was established in Tarnow, the task of which was to bring the General’s ashes from abroad and bury them in his home town. Its actions were patronized by the highest government and army authorities of Poland, including president Ignacy Moscicki and marshal Joseph Pilsudski. In 1928 the mayor of Tarnow, Julian Kryplewski, asked professor Adolf Szyszko-Bohusz to design and build a mausoleum for General Bem, which was later situated in the town park on an isle surrounded by the pond.

The mausoleum is a sarcophagus based on six columns with Corinthian caps. Wall of the sarcophagus are inscribed with:
– three dates: of General’s birth (1794), death (1850) and the arrival of his ashes to Tarnow (1929)
– four inscriptions: in Polish (Jozef Bem), Hungarian (translated as Papa Bem, the greatest defender of Hungarian freedom 1848-1849) and Turkish, written in Arabic alphabet, (Ferik Murad Pasza – ferik means general, Murad Pasza is Bem’s Turkish name)

General Bem’s ashes were placed in the sarcophagus on 30 June, 1929 in a ceremony in attended by the army representatives and foreign delegations.