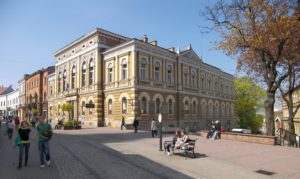 Building located on the 10 Wałowa street was constructed especially for the purposes of Tarnów Savings-Bank, which was the first, and for tens of years, one of biggest financial institution in the city. The main aim of the savings-bank was to support small trade, craftsman and local industry, at the same time it was to credit city investments and allocate part of its profits for support of various social institutions and cultural initiatives in Tarnów. The building was erected between 1880 and 1882, according to the design created by Karol Polityński, one of the most prominent architects in Tarnów and a builder of the city. At the beginning, it was decided to construct headquarters, not only for the savings-bank but also for other authorities, as the local city hall thought about a new building and declared financial support for the investment. In the end, on the 3rd of February 1880, savings-bank bought the building on Wałowa street and on the 31st of March, of the same year, it was decided that the ground floor will be designated for the savings-bank and the upper floor will be earmarked for a concert hall and a ballroom. Construction encountered various problems, building abilities and construction materials used, were questioned. There were also objections to employing a Kraków engineer, Jan Krzyżanowski, as a construction manager. This is what was written about the construction in Tarnów’s “Pogoń” on the 1st of May 1882. 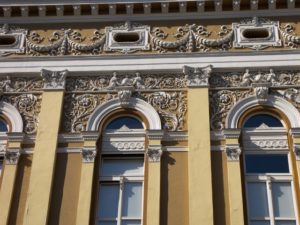 “Construction of a building for the savings-bank, which is to be finished in July, is constantly subject to constant changes and new ideas. Besides various imperfections inside the building, bricklayers started to make window openings, which now seem to be too small. It does not take a specialist, to see that the whole construction will be weakened by a dozen or so window openings, especially when they’ll start making slots in the semicircle archways, for metal windows. Also sandstone used for construction, is not dense enough and can be chipped off by hand. During work, stone workers filled, chipped off pieces, with cement. Why was the construction, not entrusted to the designer but to a builder form Kraków, who has to travel to Tarnów and cannot oversee everything properly and execute according to plans? Well! That’s fate of our public investments!”
The building is made up of two penetrating structures, in a neo-Renaissance style, richly decorated. It represents one of the best example of eclecticism and historic styles in Tarnów. Building of the Tarnów savings-bank, had a particularly representative character and as a public building was, by the local community, set in opposition to governmental buildings which were erected in the city at that time. It was designated to be a financial and cultural center of the city and it served this purpose for almost 60 years, until 1939, although it was a home to several cultural institutions after World War II. In the building, next to the savings society, a pawnshop and a several private music schools, were located. Starting in 1951 the building was managed by PKO Bank for over 30 years. Along with the state bank, Exhibitions Office, Association of the Friends of Tarnów (until 1990), Adam Mickiewicz Literary Society and Tarnów Music Society, all resided in the building. Two years after regime changes, in 1991, all of the above mentioned institutions were moved out of the building, which was bought by Bank Przemysłowo – Handlowy.