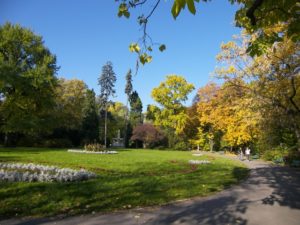 Municipal park in Tarnów was set up in 1866. Franciszek Herzig states: ”This year, on the grounds of an old Podwale Dyksonówka farm, donated by the city, a shooting range for the shooting association was established, it was also decided that a park will be setup right beside the range.” The author of the park’s design was Antoni Schmidt, a gardener from Krosno. The park did not undergo any changes for a longer period of time. However its internal layout kept getting more complicated with time. On a city map from around 1878 internal layout of the park can be seen. Garden was located on a swampy and picturesque rectangular piece of land in the northern side of the city. This land was, in its southern part, elevated with a short and steep southern slope and an easy and long northern slope. Garden area was divided into a walking garden on the east and a working garden on the west. Working garden was divided into a tree nursery and a vegetable garden located in the north-western side. 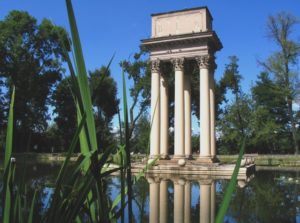 Shooting range building was located in the south-western part and an open range was located right next to it to the north. Main gate was located on the corner of Seminaryjska (Piłsudskiego) and Kurkowa (Słowackiego) streets. Park’s plan tied into this setup through two straight avenues which ran perpendicularly to these two roads, creating a passage to a further, irregular, layout of park’s alleys. Internal layout of avenues, grass carpets and bushes, contained countless surprises and changing views, brought about by a specific location of hedges. Today Strzelecki park is accessible through 4 main gates, two of those are located on Romanowicza street, and one on Słowackiego and one on Piłsudskiego streets. Currently Strzelecki Park is a place where Tarnów’s families go for family walks.

The Building of the Shooting Brotherhood

The glorious traditions, originating as long ago as the Medieval Ages, of the Brotherhood of the Rooster [Bractwo Kurkowe] were continued by the Shooting Association established in 1845 on the basis of a decree of the Galician Gubernium [Gubernium Galicyjskie] (gubernium – unit of local administration in Austria functioning in 18th and 19th century). The real reason for resuming the activity of the Brotherhood of the Rooster – preparation of civilians for possible military actions aimed at regaining the independence of Poland – was concealed under a laconic provision of the statute on “decent and orderly entertainment involving shooting at the shooting target”.

Owing to the benevolence of the authorities of the city of Tarnów, including the personal one of the contemporary mayor, Józef Pędracki, in 1866, the city gave the Association 14 morgen (ca. 8 ha) of land within the area of old city farm, Podwale – Dyksonówka. In the same year, the building of a shooting range was put into operation and its neo-Gothic structure survived until today. The author of the design could have been Franciszek Lanci or his imitator. The plastered façade of the building is furnished with battlements. Slender turrets divide the elevation providing the building with monumental character. The large room, which covers almost half of the building, served both as an indoor shooting range and a ballroom.

On the eastern elevation, there is a plaque commemorating Józef Pędracki which was built in in 1888 owing to the efforts of the members of the Shooting Association.

Here, during the night of 30th October 1918, ca. 200 young people from the National Emergency Squads of the Polish Scouts [Harcerskie Pogotowie Narodowe] and POWs were put up in barracks and the following day, they conducted the operation of disarming the Austrians and taking over the civil administration in the city.

After the II World War, this building was the first seat of the Youth Centre and the Tarnów District of the Polish Scouting and Guiding Association. Currently, there is the Office of Artistic Exhibitions – the City Gallery in Tarnów.