In the neighborhood of newly renovated train station and ‘Planty Kolejowe’ park stands an original structure – water fountain design as the model of our solar system. The Sun was build steel and glass whereas granite planets were placed within orbits made of steel. Moved by the water they rotate just like the real ones. The fountain is illuminated and therefore especially worth seeing after the sunset.

House number 8 on the present General Joseph Bem Square (formerly Burek or the Holy Spirit Square) was indicated as the birthplace of Joseph Bem probably by a historian - Jan Leniek, a headmaster of the II Gymnasium in Tarnow. On 15 December 1910, on the sixtieth anniversary of general’s death, mayor Tadeusz Tertil proposed, and the Town Council passed a resolution, “to place a plaque in the wall of Bem’s birth house” to commemorate this event.

South side of the Sobieski square is decorated by a building with a structurally complicated facade, constructed in the spirit of historical architecture. This building, for a very long time, served the local community as one of the most important public buildings. For over 100 years it was the seat of the County Government, and from 1867 (after Galicia gained autonomy) it served as the seat of the Tarnów District Government.﻿

Once called „Princely” or Rail”, from the 9th of May 1889 is a city property and from the year 2004 it bears the name of Józef Jakubowski, a local government activist and creator of the Municipal Museum, opened in 1927. In the eighties of the 19th century, green area was a frightful place for all those who on their way to or from the railway station, had to pass through the thick of bushes, which were an excellent hiding place for all sorts of villains and thugs.

Thanks to the efforts of Tarnów’s Bishop Leon Wałęga, on the 1st of February 1904, first two priests from the Gathering of Missionaries arrived in Tarnów. They stayed at the Bernardine monastery on Bernardyńska street and held services in the St Mary’s Church in the Burek. Excellent spot for construction was chosen and soon after construction began. 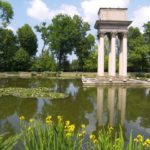 In the middle of a pond in the town park, former Shooting Garden of the Cock Fraternity, a considerably large Mausoleum of General Joseph Bem is placed. Bem, the hero of Polish and Hungarian fights for independence during the November Insurrection and the People’s Spring Struggle 1848-1849, was born in Tarnow in 1794 and died in distant Syrian Aleppo in 1850, where he was originally buried at Muslim cemetery.

Franciscans – observers also know as the Bernardine were brought to the city by Jan Amor Tarnowski in 1459. The monastery was erected in accordance to the Bernardine principles, located outside the city and occupied one of the gardens adjacent to the southern part of the city wall. Originally, monastery was most likely a wooden one, and treated as a temporary building, right from the beginning. 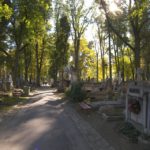 First known burial in the “old” cemetery, located on the corner of the Tuchowska and Narutowicza streets, dates back to 1791. At first the cemetery served as a burial place for poor people, although the gravestone of Princess Maria Anna of Lubomirscy Radziwiłłowa, a wife of Prince Karol called “Mr. Lover”, comes from that time period.

Inclusion of the Kraków Republic into the Habsburg Empire in 1846 brought about an idea of connecting Kraków with Lvov by a railway. Work begun and in 1853 a rail connection between Dębica and Bochnia was finished, however Kraków was not a part of this line. Beginning of the Crimean war in the same year, and subsequent tensions between Austria and Russia, forced the Viennese government to rationalize transport in Galicia. Official opening of a railway running through Tarnów, took place on the 20th of February 1856.

The Sekler's Gate of Joseph Bem and Sándor Petőfi is a gift of the Hungarian Irott Szo Foundation and the city of Sepsiszentgyőrgy for Tarnow. It is the second gate of this kind in Poland – the other one is in Stary Sacz. The day of its opening, 26 May 2001, is linked with the 170th anniversary of the Ostroleka battle – one of the battles of the November Insurrection in Poland, in which General Bem participated. 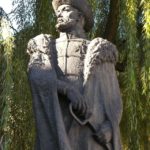 From 11 May 1985 inhabitants of Tarnow can admire the statue of General Joseph Bem, which is located on Walowa Street. The monument was founded thanks to the generosity of the Polish-Hungarian Friendship Society of Tarnow, the town’s residents and many other people not directly connected with Tarnow. 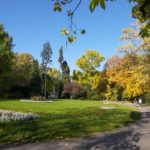 Municipal park in Tarnów was set up in 1866. Franciszek Herzig states: ”This year, on the grounds of an old Podwale Dyksonówka farm, donated by the city, a shooting range for the shooting association was established, it was also decided that a park will be setup right beside the range.” The author of the park’s design was Antoni Schmidt, a gardener from Krosno.

Close to the first residence of Dzikowski family on Sowińskiego street, father in law of the famous inventor Jan Szczepanik build another tenement house on the Szopena Street 11. This time the author of the project was Franciszek Hackbeil the younger, known in the city architect, who designed the house in his own style. Attention is immediately drawn to a tower, in the corner of the building, finished off with a dome roof. Over the windows of the side wall, there is a visible architecturally exposed owner’s monogram “Z.D.”

At 11 Sowińskiego street, a tenement house build in 1907 according to plans of Mr. August Tarkowski is located, this was the first house owned by the family of Doctor Zygmunt Dzikowski, Jan Szczepanik’s father in law, after their move from Przemyśl to Tarnów. Not only did the owner approve of the architect’s plans but he also enriched them, the attic was embossed with a woman’s head, depicting the owner’s daughter and a later wife of the “Polish Edison” Wanda Szczepanik. 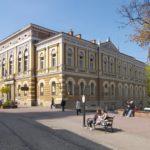 Building located on the 10 Wałowa street was constructed especially for the purposes of Tarnów Savings-Bank, which was the first, and for tens of years, one of biggest financial institution in the city. The main aim of the savings-bank was to support small trade, craftsman and local industry, at the same time it was to credit city investments and allocate part of its profits for support of various social institutions and cultural initiatives in Tarnów.