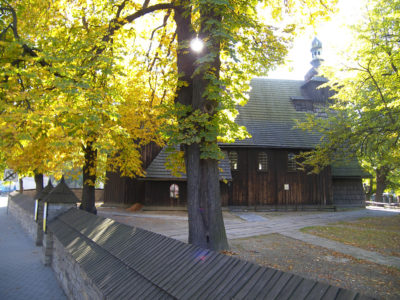 Blessed Virgin Mary church, originally dedicated to Our Lady of the Assumption, was likely built in 1458, by “6 peasants from the Major Suburb” of timber that had been used previously in the construction of the parish church that stood on site of the cathedral. The 19th c. inscription on the rood beam informs that the church was consecrated in 1462 by two cardinals: Isidore and Nicolas. If the two had indeed consecrated the church, then the building had to be erected before the official date as it is historically proven that the cardinals visited Tarnów in March of 1440. The church was a subject of several construction works, including one after the great fire of Tarnów of 1617. 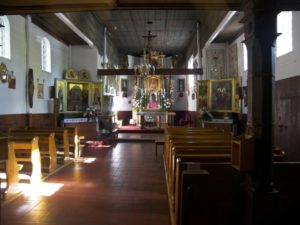 In the 19th century the whole structure was relocated 6 meters off the banks of Wątok. Tower was added only in 1910. Repairs of the WW2 damages and preservation works were completed in the mid-60’s. Interior decoration encompasses fragments of the 17th c. wall polychromes and ornamented parapet of the late-Renaissance choir with emblems of the church donors. The Rococo high altar shelters miraculous painting of Our Lady with the Child of the 16th century. Side altars are the replicas of the Gothic-Renaissance triptychs, secured in the Diocese Museum. 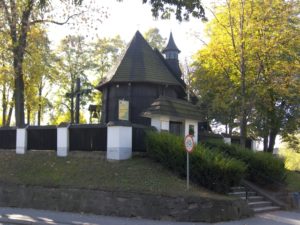 The Holy Trinity church was erected between 1595 – 1597 aside the road connecting town with the castle and the original route towards Kraków. In the year of its completion, the church was consecrated by Cardinal Jerzy Radziwiłł. Its existence was threatened in the 19th c. by development of rail transport. The new extension to Dębica, built in the close vicinity to the church, raised a risk of fire from the sparks of the locomotives. The authorities have already ordered the dismantling of the church, when pastor Michał Król came up with the idea to coat the whole structure with metal sheets and ultimately saved it. Flat ceiling inside is decorated with early 20th century painting of the Virgin Mary. The 17th c., late-Renaissance, high altar shelters an intriguing painting on panel, dating to 1600. It is representation of the Holy Trinity type known as the Throne of Grace. Base of the high altar encompasses the foundation stone engraved with date ‘1595’, the year the construction begun. Two side altars and the crucifix upon the rood beam date to the early 17th c. There are two Latin inscriptions on sides of the beam. One reminds Fr. Łukasz Godzinka, the architect of church erection. The other, informs of Fr. Michał Król’s renovation. 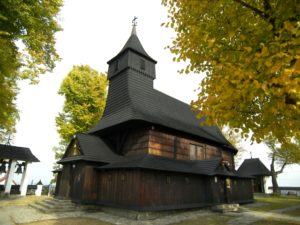 It is believed that the church in Zawada was erected in place of a shrine of Perun, Slavic god of thunder and lighting. It was allegedly founded by Spycymir of Tarnów, who came around the place while hunting. The church building itself, according to the legend, was found floating down the Dunajec River. The earliest written information on the parish in Zawada date to 1326, although it might have been established already in the 12th c., when the land was bestowed on the Tyniec Monastery. In the pagan times, the area was inhabited by Wiślanie (the Vistulans), Slavic tribe. Remnants of their impressive settlement and a hill fort were found nearby. The ‘soboty’, wooden arcades outside used as a shelter, were added in the 17th century. South and west entrances preserve original Gothic ogive doorway and pieces of the Gothic door fittings. The oldest furnishing are the late-Gothic bas-relief decorations of the choir parapet and the crucifix of the same age. A rosary attached to the rood beam was made by a blind shepherd of the single piece of wood. But most important pieces inside are the altars: the 17th c. neo-Baroque high altar with the painting of St Martin the Bishop and sculptures of Wojciech and Stanisław; and two late-Baroque side altars. The smallest of the bells at the tower dates to the 1606.