Home page / Worth seeing / Tarnów / History of the City

On March 7th, 1330, the royal chamber of king Wladyslaw Lokietek granted Spicymir, Krakow’s governor, a document which allowed him the right to develop the city of Tarnow. The reason for which was that there was both a trade route connecting Germany to Russia and a crossing route from Hungary to the Baltic Sea that ran through the lands of Tarnow. He chose to locate the city on a hill, which set Tarnow high above its surrounding landscape (226 m above sea level). The Medieval layout of the city that was characteristic of the time of its founding, is still preserved today.

The greatest period of development for Tarnow occurred in the 16 th century when Jan Tarnowski the nobleman, or hetman, and famous entrepreneur was the heir of Tarnow. In 1536 there lived 200 tenement houses and 2000 inhabitants within the city walls. Unfortunately, from the years 1567 up to 1787 (the year it became a private city) numerous fires, diseases, wars, and most of all the greed of local authorities ravaged the city and ended the period of prosperity. In an attempt to return itself to a thriving existence, Tarnow started to increase development again at the end of the 18 th century. In 1782 it became the seat of the district and in 1786 it was also bishopric. Additionally, a large garrison was stationed here with headquarters for the division and brigade. 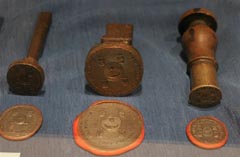 In 1870, Tarnow had 21,779 inhabitants and was the third largest city in Galicia, after Lvov and Krakow. When WWI broke out in August 1914, Tarnovians willingly joined the Polish Legions and at the end of October 1918, Tarnow was the first city in Poland to gain its independence. During the period of the Republic of Poland in the years from 1918-1939, Tarnow was developing into an industrial city. This was all ended when on August 28, 1939 a time bomb left by a German saboteur exploded in the Tarnow railway station. Twenty people died and it is argued that World War II was started here as a result. On June 14, 1940 was the first transport of 728 prisoners from the Jewish bath to the concentration camp in Auschwitz.

After the war, Tarnow was the district capital within the province of Krakow and In 1975, as a result of the administrative reform of the country, it became the provincial capital. The city then took the role of an important administrative, economic, and cultural center of the region. At the same time the number of inhabitants exceeded 120 thousand, however on January 1, 1999, the city lost its provincial capital title. Currently, it is the seat of two districts, both of the city and the district lands.