Home page / Worth seeing / Did you know that…? / General Bem – The Hero of Two Nations 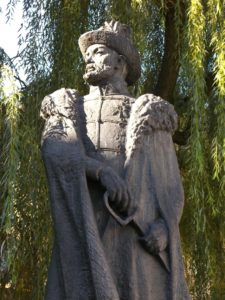 Although the original house of birth of Joseph Bem was replaced by a concrete one, the Mayor of Tarnów together with the Town Council ceremonially mounted commemorative plaque against a wall of new building on December 15, 1910, on the sixtieth anniversary of Bem’s death.

Recovered fragments of Panorama Siedmiogrodzka, or Transylvania Panorama (painting ordered by the Hungarians to honor General Bem and painted by a group of artists under Jan Styka, famous Polish painter) are exhibited at Panorama Gallery, located at the main train station in Tarnów. The original canvas was 120 m long and 15 m high and depicted Bem’s victory at the Battle of Sibiu on March 11, 1849. The Museum managed to acquire twenty four (of over 38 that have been traced so far) fragments, including the largest one (3.85m x 3.28m) that depicts the rearguard of the Hungarian Army.

The ashes of General Joseph Bem were ceremonially brought back to his hometown and placed in an imposing Mausoleum located in Strzelecki Park, in 1929.
His statue at ul. Wałowa is another memorial to the great commander. Just recently, large mural representing one of the fragments of the Panorama was painted in direct neighborhood of the statue.

Both the Mausoleum and statue are a must-see for all the Hungarians visiting Tarnów.

Another site en-route is the Petofi Square that can be entered from Krakowska St. through the Szekely gate. The latter is a gift of the Hungarian Nation for the people of Tarnów. It was second such gate in Poland.